That Time I Was in a Movie

It was April of 2018 and I was just beginning to crawl out of another dark and stressful chapter in my life. Like a newly emerged butterfly looking to dry its wings, I sought out any and all forms of light to help spread my wings and help me fly again.

A message from an English film maker popped up on the British Expat community in Vienna. He was urgently reaching out to try and find film extras to play United Nations security guards for his upcoming film City of Spies. I just happened to still have security clearance for the United Nations Office in Vienna after I took a side job assassinating King T'Chaka secretly known as the Black Panther, so I was very familiar with their security and thought I could bring a sense of realism to the part. 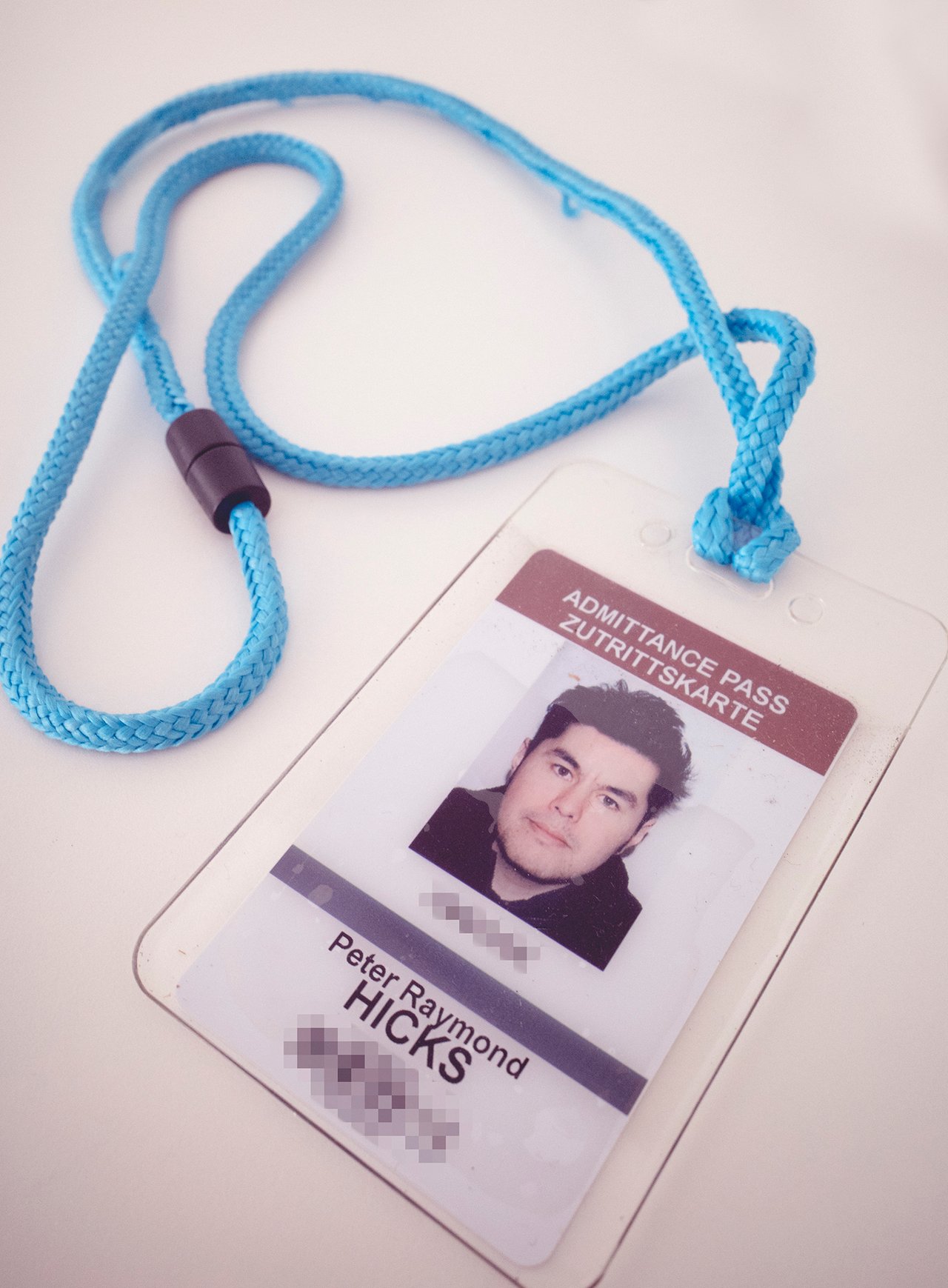 The position was non paid just your name in the credits, perhaps a little clout. Sold! 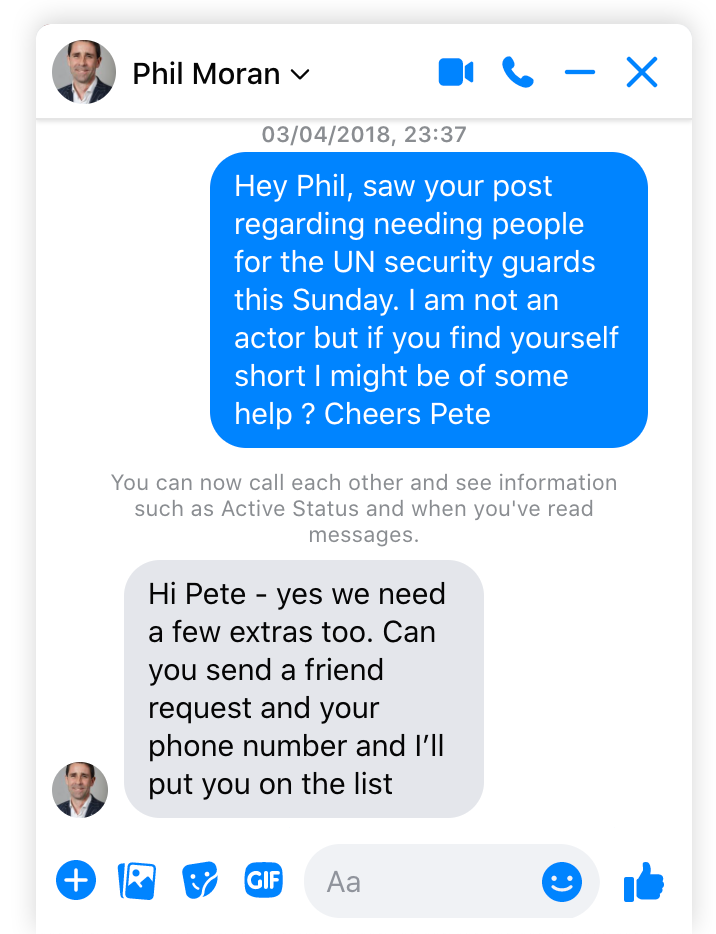 And just like that I was going to be in a movie...

The Day of Filming

Waking up on filming day I had a spring in my step as though someone had left Stevie Wonder’s “Once in my life” on repeat in the depths of my mind. I stood in front of my wardrobe contemplating the days attire. All the security guard parts had been taken so I would be playing the fabled “Man in Background.”

Slightly over thinking things, I pondered just what exactly does the man in the background choose to wear? On the one hand he is there to go unnoticed, to blend into the background, but on the other he is the butter to the baking tray of the whole scene, allowing the leading actress' performance to rise to the occasion without get stuck. To not get stuck.. Teflon

I trotted over to the kitchen and rummaged under the counter for a frying pan. Smooth matt black surface with a red teflon stamp in the center. Black and Red !

As I donned my black shirt with red lined collar, I reminisced over the only ever time I have acted in front of a camera, when I interrogated an A.I. Drug smuggling suspect who had been caught trying to smuggle kilos of imaginary Heroin.

Like Keyser Söze she too had limped her way to freedom and become just another figment of my imagination.

Arriving at the film site, I found the director Phil Moran sitting at a kitchen table going through emails, I said my hellos and joined him at the table. I could have been sitting in someone’s home, this was an ordinary everyday kitchen, where was the set? I looked around and tucked away in the corner were a pair of heavyset industrial doors. What magic lay within?

As the time passed more actors arrived and found their way over to the table. I felt a sense of comradery between the actors making me feel somewhat like an imposter, as they treated me as one of their own. Everyone was really nice and relaxed. 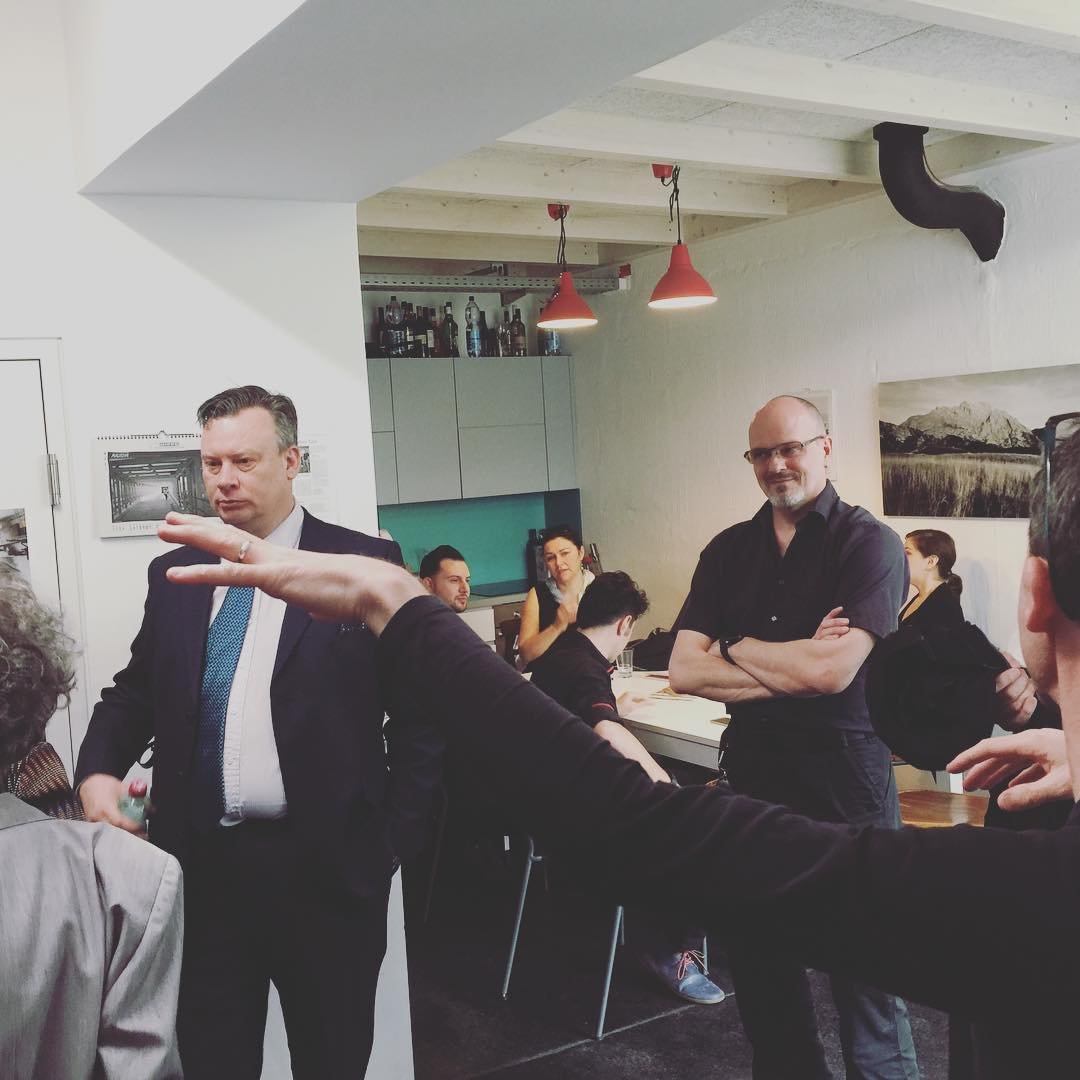 We ran through what it was that we were filming and what needed to be done. In this scene Kindra the leading actress was escaping the United Nations after getting up to no good and fled via the security entrance. It was our job as extras to populate the security entrance and go about our business getting into the United Nations. We would then react to someone fleeing from inside like she had let off a cherry bomb in one of the toilets.

The director then left the room through those mysterious doors and began to prep the scene for filming. He would periodically come back into the kitchen and collect a few more actors then disappear with them. As if being picked last for a team I began to feel a little left out as more and more actors left the kitchen. My imagination ran wild as I envisioned what was going on beyond those doors.

As mentioned previously I have experience going through security at the United Nations (think TSA airport security without the chip on their shoulder) but knowing what it’s really like seemed to make the anticipation worse. Like a child peeking through a hole in a Christmas present, you know whats inside but that doesn’t hold back the pre-excitement of actually opening it up and experiencing it.

When I was called, I stood up and headed towards my destiny. It felt like walking to the ring before a fight, with people giving me head nods which I returned whilst simultaneously trying to compose myself mentally. Emerging through those doors was akin to the technicolour revelation as Dorothy stepped through her front door into OZ.

I now saw the magic and was now part of it.

The sparce scene was setup to come to fruition through the angle of the lens. To us, what seemed like intelligently positioned cardboard and styrofoam boxes held together with duct tape became a fully functional security gate on screen. For someone not in the theatre or film business it was truly magical to see these props take on a different life from another angle. 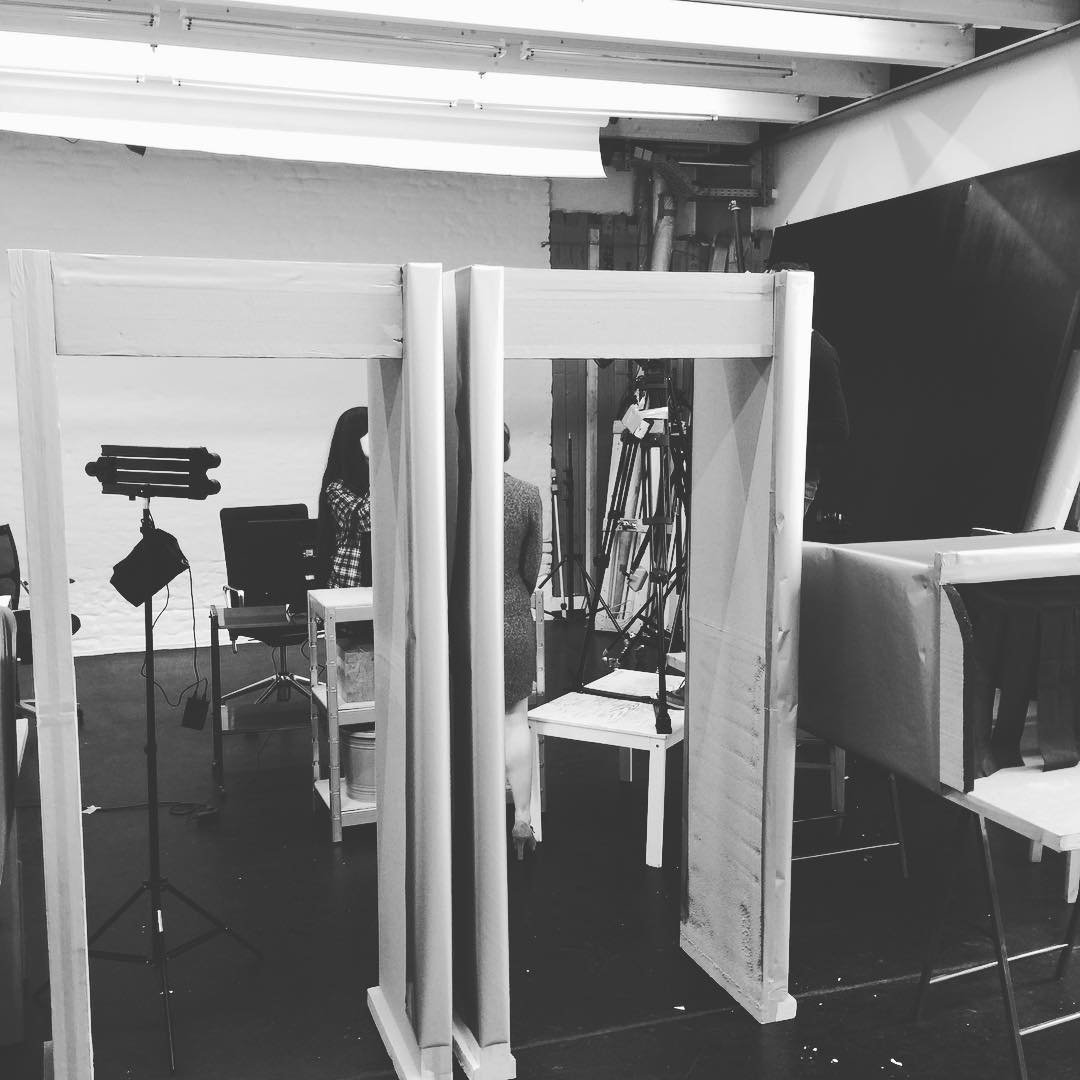 I was asked to do two scenes.

First scene I had to reveal my skill and passion as “man in background number 3.” I took that role seriously and queued up like never before. I mustered all my experience as an English man and put it into that role, looking as though everything is fine on the outside, politely calm and composed, but inside I am screaming with impatience ! In my scene I twiddle my imaginary security pass between my fingers, put it into the machine and walked through the metal detectors. For a moment I even thought to myself “I hope my belt doesn’t set off the metal detectors” then nodded a sigh of relief when I remembered that they were in fact made of cardboard. Who knew such incredible method acting pulsed through my veins.

My second scene I was tasked for the role of “man who gets bumped into by leading actress.” I was to be first in line for the ID machines when Kindra makes her escape, subsequently body checking me on her way out of the building, leaving me confused and rather annoyed that not only do I have to put up with waiting in-line but now people are bumping into me.

For this scene I had to fight the urge not to tackle the star of the movie. My years of playing rugby and experience chasing shop lifters whilst working at WHSmith Oxford Street, habitualised me into grabbing people if they tried to run past me so close. Not only that but I wasn’t allowed to do anything about it. I channeled my inner stiff upper lip and took the hits.

After more than a few practise runs being abused by Scarlett Sheriff who plays Kindra, it started to feel she was enjoying it a little too much adding some venom into her shoulder barges. Perhaps she was using the opportunity to unleash a little stress. At one point I wanted to raise my hand and tattle to the director like a school child, “Sir, she’s hitting me!”

We started to joke around and wondered if we could add a little flair to being bumped into. Perhaps we could ad-lib a Bourne Identity close combat scene, or even recreate the famous lift from Dirty Dancing. 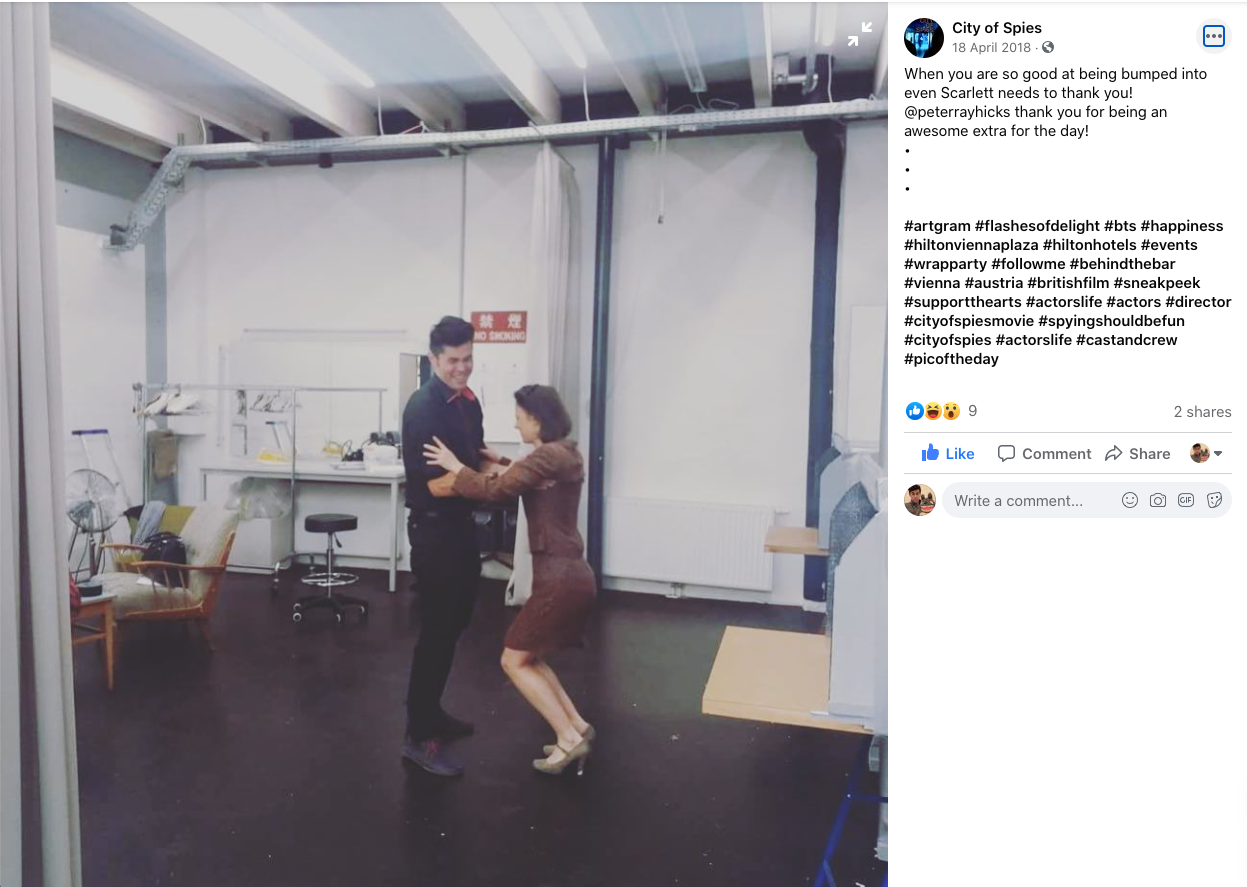 In the final take after being bumped into, I simply re-enacted my everyday experience in Vienna when people choose to stand directly in front of me when I am obviously trying to choose a sandwich at the sandwich bar of a supermarket. “Do you not see me standing here?”

Overall I had fun being an extra for a day. It was a nice insight into a world that I have not known before. I was also invited to the wrap-up party and I got a little taste of the glitz and glamour that comes along with making a film, minus the red carpet.

Unfortunately for the film, like most films that were scheduled to be released this year, Coronavirus has had a huge impact. The producers have had to find alternative ways to get this movie seen and enjoyed while the pandemic keeps us away from our beloved cinemas.

Good news for you however, you have the ability to watch the film for free from the comfort of your own home.

That’s right ! On US election day. What better way to put you in the mood for whether Donald Trump will become leader of the free world again, then by watching me get bumped into, or better still, not even making the film cut and thinking of me sitting at home crying “WHY DIDN’T I MAKE THE CUT!”

Here is the trailer to whet your appetite

I would like to thank Philip Moran and all the City of Spies team for letting me be a part of your world, and giving me the opportunity to share my experience with my son, family and friends.

I made the cut, below you will find my award winning performance